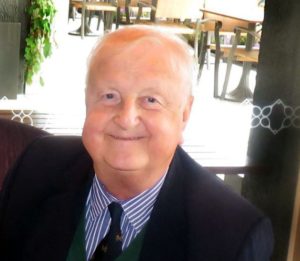 The Jesters Club member Stephen Sayer was born 8th July 1945 and died after a very long battle with prostate cancer on 14th March 2018.

He and his old friend Oliver Everett found themselves living near Haileybury in the late 1960’s. They persuaded the school and encouraged by Peter Ellis started playing regularly with the school pairs.

Next was Real Tennis. Stephen joined Hatfield and by the early ’70s was playing in their matches and providing hospitality at their home games. It was prior to the Club Room and club catering. His enthusiasm spread and was a major factor in the club forming and becoming the success it is today.

A Jester since 1981, Stephen was always very supportive of the Jesters Club and its ideals. He had a long personal and business history dating back to the early 80’s with the current Jesters Chairman, Gareth Quarry, and was one of Gareth’s principals when he trained as a lawyer, mentoring Gareth then and since and spiriting him out of the office during office hours for regular games of squash.

Even when he and Aileen re-located to Oman to open his firm’s office where his enthusiasm was such that hospital appointments back in U.K. always seemed to coincide with a club game and he invariably played in the Strawson Jesters start of the season fixture.

Stephen had a very special gift of making friends and keeping in touch with them. A very generous host whether in Hatfield, Fulham, Oman, Italy, New South Wales, and this past year in Chiswick. We mourn him deeply and give our deepest sympathies to Aileen, Edward and Harriett and the other members of his family.

There is a private family funeral. The Service of Remembrance will be held at 2.30 at Southwark Cathedral on 5th June 2018.